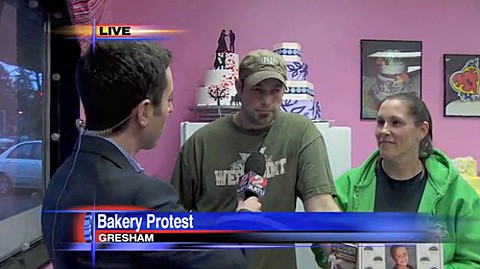 Sweet Cakes, the Oregon bakery which refused to bake a cake in January 2013 after they found out it was for a lesbian's wedding, has been found guilty by the Oregon Bureau of Labor and Industries of discriminating against the couple getting married and faces fines of up to $150,000, KGW Portland reports:

In Jan. 2013, Laurel Bowman said Sweet Cakes refused to sell her and her fiancée a cake for their upcoming wedding. Bowman said Aaron Klein, the co-owner of Sweet Cakes by Melissa, said the couple's union was an "abomination unto the lord."

Bowman filed an anti-discrimination complaint with BOLI later that year, alleging that the bakery violated the Oregon Equality Act of 2007, which protects the rights of Oregonians who are gay, lesbian, bisexual or transgender.

Sweet Cakes closed in September 2013, moving its business to an 'in-home' bakery after the state began its investigation and it became the target of protests.

The baker posted a sign on the door at the time:

"This fight is not over. We will continue to stand strong. Your Religious Freedom is becoming not Free anymore. This is ridiculous that we can not practice our faith. The LORD is good and we will continue to serve Him with all our heart. ♥”

Previous Post: « What To Watch This Week on TV: Wedding Bells for ‘Lance,’ ‘Glee’ and ‘Parks and Rec’
Next Post: Aaron Schock’s New Office Decor is Inspired by ‘Downton Abbey’ »