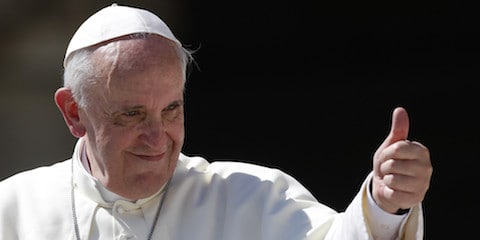 Slovakia will be voting on a referendum this Saturday that, if passed, would ban marriage and adoption rights to homosexual couples in the country. Last June the country added language to the constitution that banned recognition of same-sex couples, so the referendum will not be adding anything new on that front, but the denial of adoption rights is salt in the wound of same-sex couples. Enter Pope Francis who this past Wednesday in Rome said,

I greet the pilgrims from Slovakia and, through them, I wish to express my appreciation to the entire Slovak church, encouraging everyone to continue their efforts in defense of the family, the vital cell of society.

This comes as a mighty endorsement in a country that is approximately 2/3 Catholic. Confusingly, Father Martin Kramara, the spokesperson for the Conference of Slovak Bishops, told BuzzFeed that,

We would be very unhappy if [the referendum] generates any animosity against homosexually oriented people.

Denial of the basic right to marry and reduced to "other" status that is implied to be unfit for raising children? Why on earth would any animosity arise from that?