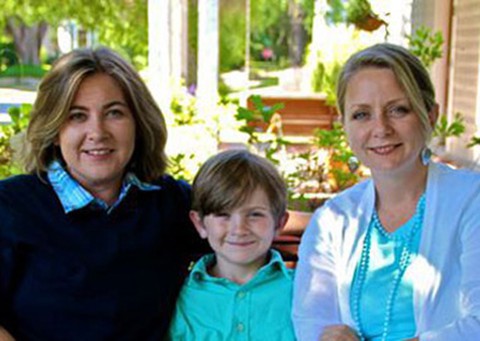 Previously, we told you about Cari Searcy and Kimberly McKeand, the Mobile, Alabama couple that sued the state to recognize their 2008 wedding in California as legitimate and sought crowdfunding to help to pay for the $40,000 in legal fees they incurred fighting the discriminatory ban. The couple is set to head back to court, filing a new lawsuit against the state, demanding that Searcy's request for a second-parent adoption of the child the couple have raised together be granted immediately. Probate Judge Don Davis had denied the petition despite the recent ruling striking down Alabama's marriage ban. Davis said he would not consider the matter until the Supreme Court rules on the same-sex marriage cases it agreed to undertake.

As AL.com reports, the very reason Searcy and McKeand challenged Alabama's marriage ban in the first place was so that Searcy could be legally recognized as a parent to their son:

"I'm disappointed. The United States Supreme Court made a decision with the ruling in the Searcy case," he said. "We don't think that it's fair or equitable to Cari Searcy to wait until the Supreme Court has ruled on some 6th Circuit (U.S. Court of Appeals) case." […]

On Friday, Davis issued an "interlocutory decree" granting Searcy temporary parental rights, including the authority to consent to necessary medical treatment. Such temporary orders are standard in second-parent adoptions until the court can convene a hearing to review any potential objection to a permanent adoption.

Those final hearings typically last about 15 minutes, according to lawyers familiar with those proceedings.

But Davis included a paragraph stating, "It is further ORDERED by the Court that this Decree is qualified in nature, and the Court will not issue a final adoption order until a final ruling is issued in the United States Supreme Court on the Marriage Act cases before it."

In addition to the court order instructing Davis to grant the adoption without further delay, the lawsuit also asks for compensatory and – if the judge deems it appropriate – punitive damages, as well as legal fees.

While the interlocutory decree grants Searcy some additional rights it does guarantee that Searcy would have custody over the child should her wife die.