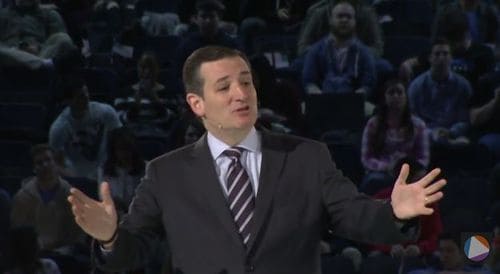 Speaking before a huge audience at Jerry Fallwell's Liberty University today, Sen. Ted Cruz officially announced his entry into the 2016 presidential race and provided America with an imaginative (read: nightmarish) look into what we could expect from a Cruz presidency.

Unsurprisingly, Cruz's speech was littered with typical right-wing red meat concerns: religious liberty is under attack, marriage is being destroyed by the gays, Obama is trying to take away our guns, etc, etc…

Regardless of whether or not you think Cruz will be a serious contender moving forward, the full speech should still be required viewing – if only to help hammer in the point to prospective voters that this man must not win next year. We've already seen what happens when we hand over the Oval Office keys to a Republican from Texas with deep ties to the Religious Right.

Watch the speech (and the new Cruz 2016 campaign videos), AFTER THE JUMP…

Marriage part starts around the 18:00 mark

Previous Post: « John Oliver Tackles Municipal Violations and the Problem With Using Fines to Fund the Government: VIDEO
Next Post: Elisabeth Moss and Jason Biggs Open on Broadway in ‘The Heidi Chronicles’: REVIEW »