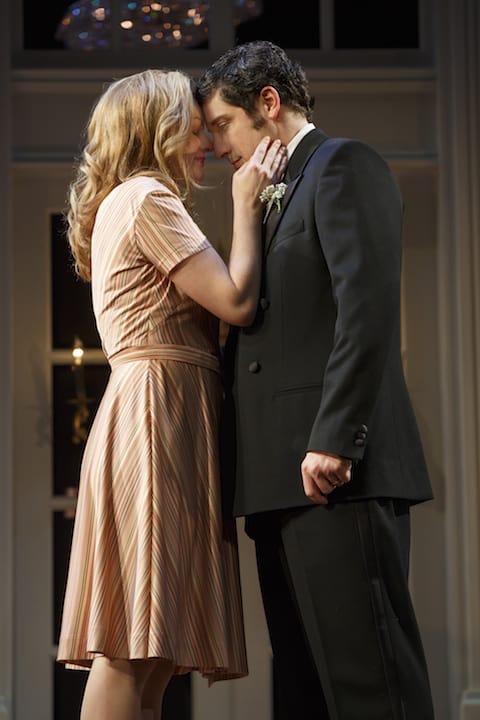 You may be surprised, at times, that characters don’t burst into song in director Pam MacKinnon’s often campy revival of Wendy Wasserstein’s Tony and Pulitzer Prize-winning 1989 play The Heidi Chronicles, which opened on Broadway March 19 at the Music Box Theatre. Though our vocabulary around feminism has changed, the decades-spanning story of a woman finding her way (and herself) through second-wave feminism certainly bears revisiting and still resonates in many ways. But, while the production features strong performances from a charming leading cast, MacKinnon’s caricatured approach to the play’s historical setting pushes the story to feel more distant than relevant. 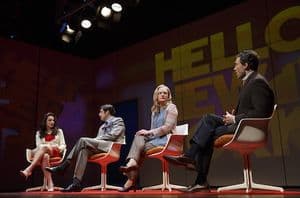 Heidi Holland, played with gusto and grace by Elisabeth Moss, first addresses us from behind a lectern in 1989, an art historian speaking out for women artists overlooked in the male-dominated canon. We then begin Heidi’s story at a high school dance in 1965, where she meets her lifelong friend Peter (who later turns out to be gay), played to quirky and comic perfection by Bryce Pinkham (Tony nominated for A Gentleman’s Guide to Love and Murder). At a Eugene McCarthy rally in ’68, she meets cocky and quick-witted Scoop (played by Jason Biggs, excellent), who becomes her on-again, off-again lover for the next decade. 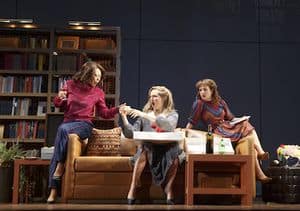 The women in Heidi’s life, and her shifting relationships with them, are the measures against which her personal journey unfolds—the radical feminists surrounding her in the ‘70s give way to mothers and career women of the ‘80s. Having given her life to the movement and been molded in its ideals, she’s disillusioned to find that most of her comrades have abandoned her and the high road she imagined stretching before them; by the time they reach their late 30s and early 40s, youthful ideals give way to conventional adult life.

As she’s proven in her sterling performance as Peggy Olsen on Mad Men, Moss is very much at home in the role of a striving, nuanced, pioneering woman, and her talents translate seamlessly to the stage. Both Pinkham and Biggs are perfectly cast, and their unique chemistries with Moss are a delight to watch. The three leads give grounded, emotionally resonant performances, which, refreshingly (if unfortunately) stand in marked contrast to the rest of MacKinnon’s production. 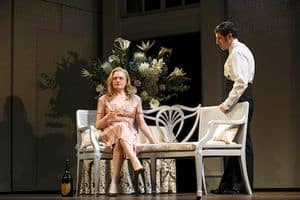 In its nearly 30-year span, Wasserstein’s play seizes on decade-defining moments and sentiments that can easily ring cliché—and, because this production often puts those eras (and their defining concerns) in air-quotes with a steady rotation of wigs, projections, and indicative design—they too often do. When the original production premiered on Broadway in 1989, Wasserstein was telling a story about her own generation with a certain heightened naturalism. Just over 25 years later, that history is relevant as ever—even when it's done up to look more like Hairspray.