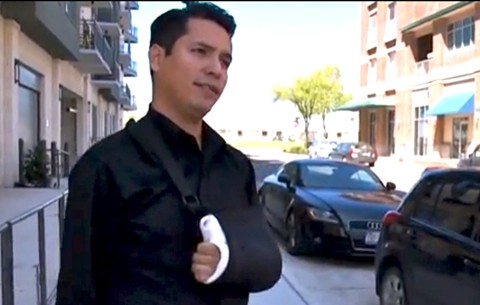 An Austin man claims a W Hotel bar bouncer called him a “fag” before throwing him to the ground — breaking his arm, dislocating two bones in his hand and possibly causing nerve damage.

According to a police report, a hotel bouncer asked him and his friends to leave because they were too drunk. Beltran and the bouncer exchanged heated words, and that’s when the hotel worker called him a gay slur.

“He was walking behind me and said, ‘That’s right, fag,’ and continued to walk me out of the building,” Beltran said. “I turned to him and said ‘That’s not right, you can’t be doing that stuff.'”

Beltran said that’s when the bouncer violently threw him to the ground. Once he was outside the hotel, Beltran said he realized how injured he was and that friends took him to the hospital.

Beltran’s attorney planned to file a lawsuit against the W Austin Hotel on Wednesday.

The W Austin is situated near the city’s largest gay clubs, and the chain is otherwise very LGBT-friendly. Parent company Starwood Hotels & Resorts received a perfect score of 100 on the Human Rights Campaign’s most recent Corporate Equality Index. The W Austin provided this statement to KVUE:

“Providing a safe environment is the essence of our business. The hotel contacted police the night of the incident and will cooperate with law enforcement in any investigation they undertake.”

Watch KVUE’s report, AFTER THE JUMP …

Previous Post: « Gay Hook-Up App Planned for the Apple Watch Will Notify You When the Right Guys are Nearby
Next Post: J.K. Rowling Responds Perfectly to Fan Who ‘Couldn’t See’ Why Dumbledore is Gay »