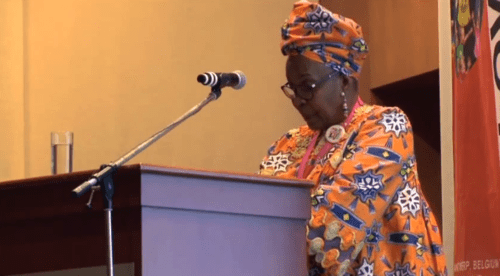 For the better part of the last decade Alice Nkom, a Cameroonian lawyer, has been doing everything in her power to strike down Article 347 of Cameroon’s penal code. Article 347, like many of the antiquated morality laws first created under colonial rule, punishes consenting adults who engaging in same-sex sexual activities. Currently Nkom is in the process of challenging Article 347’s constitutionality through in two separate cases being presented to Cameroon’s Supreme Court.

“If we unite our efforts and our resources, we will get the supreme court to join the other supreme courts in the world to firmly condemn the use of Article 347 as a basis for legal action or verdicts,” Nkom said to The Guardian. “I need everyone because right now, I am a little isolated. It’s on occasions like this that we must show we are one, united, universal in this fight.”

Both of the cases Nkom has decide to throw her weight behind stem from seemingly innocuous situations. Roger Jean-Claude Mbédé (pictured right with Nkom), who is now dead, was arrested in 2011 after professing his love for another man via text message. In 2012, two other Cameroonian men were detained by local police for their outwardly feminine gender presentation. Nkom is representing both of these cases to the Cameroonian Supreme Court in an effort to shed light on the country’s mistreatment of its queer population.

Her actions have earned her the title of  “the devil’s lawyer” from opponents who view her defense of LGBT rights as an a sin. In Nkom’s mind, however, she’s merely fighting against a longstanding, illegal overreach of the Executive Branch of Cameroon’s powers.

“Even in Europe, when we look at the countries that penalise homosexuality today, and I am thinking of Russia, we see that the problem is an absence of democracy,” she said. “The two are linked.”

“This is a fight for human rights. Its does not pit African traditions against western traditions or the colonised against colonizers,” she explained. “Africa has the same universal values and belongs to humanity. It is not separate, and neither is Cameroon.”

Previous Post: « Check Out This Stunning Bird’s-Eye View of An Eagle Descending From World’s Tallest Building: VIDEO
Next Post: Towleroad’s Top 10 Must Watch LGBT Videos of the Week »