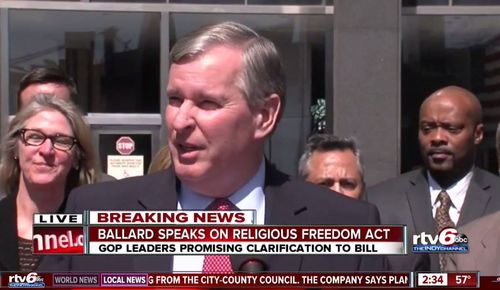 Indianapolis Mayor Greg Ballard has called on the Indiana General Assembly to add sexual orientation as a protected class and says he will issue an executive order stating that anyone who receives money from the city must abide by its human rights ordinance.

Indianapolis currently prohibits discrimination on the basis of gender identity and sexual orientation, according to the HRC.

"Our city thrives because we have welcomed and embraced diversity. And RFRA threatens what thousands have spent decades building," Ballard said.

"Discrimination is wrong. And I hope that message is being heard loud and clear at our Statehouse."

Ballard said that everyone will be welcome at the NCAA men's basketball Final Four this weekend.

Later Monday, the City-County Council will introduce Proposition 120, a special resolution denouncing the law and urging the General Assembly to add protections for sexual orientation to state civil rights law. Failing that, the resolution says, the state should exempt local human rights ordinances from the statute.

"The city of Indianapolis is a welcoming place that values all its citizens — SB 101 does not reflect the diversity of our great city," Council President Maggie Lewis said in a statement.

GOP leaders in the General Assembly have pledged to "clarify" the intent of the state's new "religious freedom" law. State Democrats aren't buying it.