The Religious Freedom Restoration Act has put Governor Mike Pence, who signed it into law this week after several statements that he was "looking forward" to doing so, is today searching for answers after the bill created "the worst crisis of his political career," according to the Indy Star. 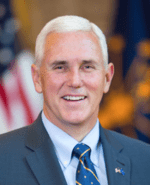 The paper reports that he'll seek to "clarify" that the law does not allow for discrimination against gay people:

“I support religious liberty, and I support this law,” Pence said in an exclusive interview. “But we are in discussions with legislative leaders this weekend to see if there’s a way to clarify the intent of the law.”

The governor, although not ready to provide details on what the new bill will say, said he expects the legislation to be introduced into the General Assembly this coming week.

Asked if that legislation might include making gay and lesbian Hoosiers a protected legal class, Pence said, “That’s not on my agenda.”

Among those who have come out publicly against the bill: the White House, the NCAA, global cloud computing company Salesforce, Yelp, George Takei, Audra McDonald, and many, many more….

Hundreds of people gathered outside the Indiana statehouse on Saturday to protest the new law.