Indianapolis Mayor Greg Ballard is slamming the "religious liberty" legislation passed by the state House and Senate that Governor Mike Pence has said he is "looking forward" to signing into law.

Said Ballard in a statement: 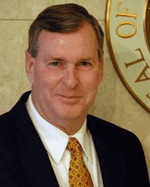 "Indianapolis strives to be a welcoming place that attracts businesses, conventions, visitors and residents. We are a diverse city, and I want everyone who visits and lives in Indy to feel comfortable here."

Daniels vowed when he became Purdue University's president to stay away from political issues.

On Tuesday, Gen Con, the massive gaming convention held annually in Indianapolis, said they would pull out and move elsewhere if Pence signs the bill.