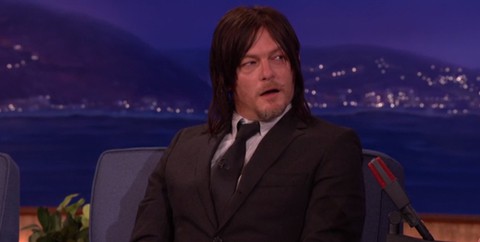 While there had been some speculation as to whether Norman Reedus' character Daryl Dixon on The Walking Dead was gay, speculation that was ultimately squashed by Robert Kirkman, the creator of the comic on which the show is based, Reedus told Conan O'Brien last night that he would have been game for tackling a more queer take on Daryl:

"I had a talk with [series creator] Frank Darrabont early, early on about 'Would you do it?' and I was like, 'hell yeah, let's do it'… If that was the story they gave me, I would rock that story. I'm not afraid of it."

Reedus previously commented that he would be down to make his character Daryl "prison gay." While Daryl is not gay on the show, The Walking Dead did recently get a new gay character and its first gay kiss (which caused some fans to go apoplectic).

Watch Reedus talk with Conan, AFTER THE JUMP…