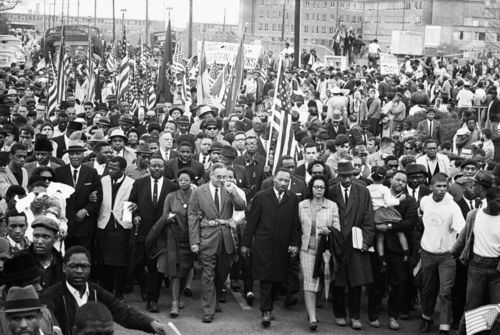 President Obama is in Selma, Alabama today to mark the 50th Anniversary of the landmark civil rights march from Selma to Montgomery. He is expected to lead the tribute at the Edmund Pettus Bridge (the site of the "Bloody Sunday" violence in 1965) with a speech at 12:15pm ET.

Dozens of charter buses and thousands of people had already poured into the west Alabama town hours before Obama's speech.

The congressional delegation will include U.S. Rep. John Lewis of Georgia, an Alabama native who was among the marchers seriously injured in the violence 50 years ago. Congressional Republican leaders were to be absent from the event, but House Speaker John Boehner of Ohio released a statement.

"Today, 50 years after the Selma to Montgomery marches began, the House honors the brave foot soldiers who risked their lives to secure the blessings of liberty for all Americans," he said.

50 yrs ago today, we set out to march from Selma to Montgomery to dramatize to the nation that people of color were denied the right to vote

Before we left a little church called Brown Chapel AME, we knelt and joined together in prayer. #Selma50 pic.twitter.com/lNuu8VU6bg

Watch the live feed, AFTER THE JUMP…

The Wall Street Journal is also marking the occasion with a look back on photographer Dan Budnik's startling images of Selma and other events documented at the time.

Previous Post: « Tom Hanks, Justin Bieber and Carly Rae Jepsen Have a Dance Celebration in ‘I Really Like You’ – VIDEO
Next Post: CNN Looks at the Executions of Gays by ISIS, Interviews Gay Couple Who Fled Syria: VIDEO »