Legislation that would have granted same-sex couples in Peru the right to enter into lawful civil unions was rejected Tuesday by the Peruvian Congress' Justice and Human Rights Committee. The bill was sponsored by the country's first out gay congressman Carlos Bruce.

The bill failed with 7 votes against, 4 in favor, and 2 abstentions. 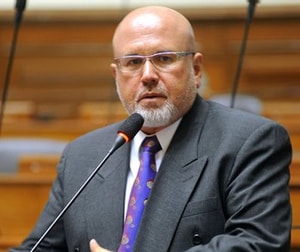 After a three-hour debate, seven members of the Congressional Justice and Human Rights Committee voted against the legislation; four voted in favor and two abstained, according to RPP Noticias.

“We have defended the natural family, as enshrined and recognized in our Peruvian Constitution,” said Congressman Julio Rosas, of the opposition, right-wing Fuerza Popular party. “This is supported by the large majority of our Peruvian society.”

Carlos Tubino, another Fuerza Popular lawmaker, called the vote a victory for Peru. “Today, the people of Peru have won,” he said.

The debate over the legislation heated up in the days leading to the vote, with opponents and supporters holding separate protests. The legislation, proposed by lawmaker Carlos Bruce, faced stiff opposition in a conservative country where the Catholic Church still plays a strong role in public and private life.

“Congressman Carlos Bruce is making a fool of himself with all of this, appearing – excuse me for the term –  like a faggot in the middle of everything,” said Bambaren. “He himself has said he is gay. Gay is not the Peruvian word, the word is faggot.”

Bruce called Bambarén's comments "typical of homophobia" and expressed his hope that Bambarén would apologize for his remarks.

Bruce remained optimistic about the bill's long-term prospects even in the face of its defeat in committee yesterday. Said Bruce,

“Today, you have seen which lawmakers are backwards, those that want to deny the rights of others, who feel superior and consider that there are Peruvians of a second class,” Bruce said after the vote. “We are on the right side of history, and we are sure that this is going to be approved.”