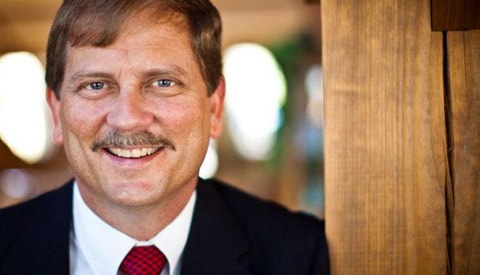 Last year, the Texas Republican Party added a plank to its platform endorsing the discredited practice of "reparative therapy."

So it isn't too surprising that the party's newly elected chair believes being gay is a choice, and that businesses should be free to turn away LGBT people. Tom Mechler (above), who was elected to lead the Texas GOP over the weekend, also says that if his local newspaper ever publishes a photo of a gay couple kissing, he'll cancel his subscription.

In a column for the Amarillo Globe-News last March, Mechler responded to LGBT activists who objected to a local gym’s refusal to offer a family membership to a same-sex couple.

“We have gone way past the point of reason in the attack by homosexual activists and other liberals who want to manipulate society to serve their purpose,” Mechler wrote. “One of the problems we are experiencing in our nation is that if you say you believe in the biblical definition of marriage (which I do), or if you express an opinion that liberals determine as being politically incorrect, they will attack you—sometimes viciously—frequently making threats against your life and property. They call your comments and thoughts homophobic or hate speech.”

Despite Mechler's victory, the outcome could have been worse for the LGBT commmunity One of the other candidates was Jared Woodfill, who has repeatedly sued out lesbian Houston Mayor Annise Parker over pro-LGBT initiatives.

But according to the Observer, Mechler represents a step backward from the previous Texas GOP chair, Steve Munisteri:

Last year, Munisteri provided a glimmer of hope that party leadership was inching forward on LGBT rights, when he responded to the controversy over a GOP plank endorsing “ex-gay” therapy by saying he didn’t believe it was possible for people to change their orientation. But Mechler doesn’t appear poised to continue that progress. …

“I believe that everyone in our country has a right to protection of his or her person and property, and their personal lifestyle choice doesn’t make them a bad person. I also strongly believe that states have a right to decide the issue of marriage,” Mechler wrote in the column. “As a final note, if the Amarillo Globe-News ever publishes a picture of two men or two women kissing each other, I will cancel my subscription.”