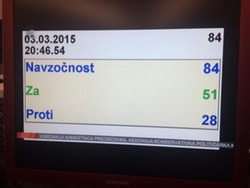 By a vote of 51-28, Slovenia's Parliament today passed legislation that would amend the current marriage and family relations act to allow same-sex couples to legally be married and adopt. As STA reports, "A coalition of conservative groups has already announced efforts for a referendum." Slovenia is the 12th European nation to recognize same-sex marriage.