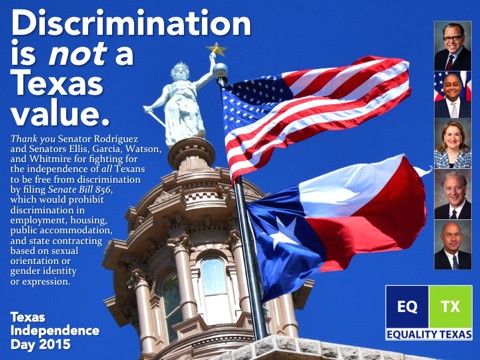 On Texas Independence day, five Democratic state senators introduced an omnibus civil rights bill that is the first of its kind in the state's history.

“I chose today—Texas Independence Day—to file this important legislation,” Senator (Jose) Rodríguez said in a release, “because Texas values—such as hard work, opportunity, and the Golden Rule—are the reason why Texas remains strong 179 years later. That is why we must act definitively to ensure everyone in the Lone Star State is treated fairly and equally.”

One of our most strongly held beliefs here in Texas is taking care of our own and treating our neighbors as ourselves. This kind of Texas spirit is visible in every town and city in the state, in family-owned businesses and large public employers.

And yet, we realize there are places across Texas where this spirit does not flourish. Texans like Isabel and Victoria in Lewisville (Denton County) can be denied housing for themselves and their sons Juan and Oscar because the two women are in a same-gender relationship. Casanova from Austin and Dylan from Houston were harassed on the job after coming out as transgender but were given no recourse by their employers; Dylan would end up being laid off. Darla from Austin has been and can again be discriminated against while attempting to secure employment because she is a lesbian. John David and his partner Jerry from Tyler can be asked to leave a public accommodation—such as a restaurant or concert venue—because they are gay. Antonia, a transgender woman of color was fired from her job because of her transition.

Further, discrimination is bad for business. Fair treatment for workers, families, and people who visit our state—including gay and transgender people—is a crucial factor in the ongoing strength of the Texas brand.

In the past, separate legislation has been filed in Texas to ban anti-LGBT discrimination in all four areas — but the effort has never been combined into a single bill. The other authors of SB 856 are Sens. Rodney Elllis, Sylvia Garcia, Kirk Watson and John Whitmire.

“Discrimination of any form has no place in Texas. Not in our schools, our government, or our services. I am proud to co-author this legislation and proud to stand strong for the fair treatment of all Texans especially our friends in the LGBT community who for too long have been the target of discrimination,” Whitmire said.

“I’m proud to coauthor legislation to prevent fellow Texans from being discriminated against due to who they love,” Ellis added. “All hardworking Texans, including our LGBT neighbors, should have the chance to earn a living, provide for their families, and live like everyone else without fear of getting fired or evicted solely because of who they are. ”

“All Texans should enjoy equal protection under the law. This important legislation would ensure that our LGBT brothers and sisters can express who they are without fear of discrimination. It would also send a message to the rest of the world that Texas welcomes anyone that wants to contribute to our great state, regardless of sexual orientation,” Garcia said.

The 20-page bill has little chance of passing in the Republican-dominated Legislature. But its introduction is important symbolically in the face of a slew of anti-LGBT legislative attacks. It could also signal a future shift to protect all LGBT civil rights with a single piece of legislation, rather than doing it piecemeal.

Read the full text of the bill, AFTER THE JUMP …