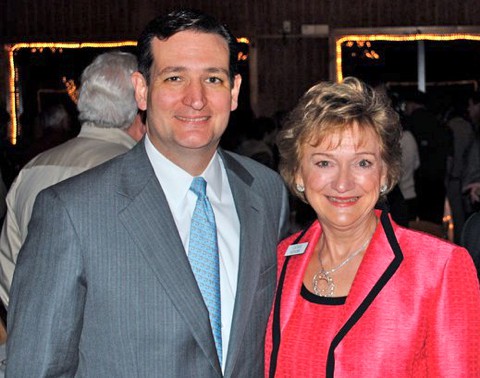 Last week, we told you how Dr. Steve Hotze, president of the Conservative Republicans of Texas, compared gays to murderers and marriage equality to the Holocaust during a hearing on a bill that would prohibit state funds from being used to issue same-sex marriage licenses.

Now, former Texas GOP Chair Cathie Adams (shown above with Sen. Ted Cruz) — who is only slightly more bigoted than the current Republican Party chair — says if Texas doesn't do something to stop same-sex marriage before the high court hears arguments April 28, it could be "the end of America."

Adams, who now heads the anti-gay Texas Eagle Forum, made the remarks during a speech on Islam this week to a Republican women's group, according to Right Wing Watch:

She said that while she admired Alabama Chief Justice Roy Moore’s defiance of the federal courts on marriage equality, “Alabama is Alabama.”

“If we don’t get this done by April 28, I don’t know that we’re going to be able to hold back what is happening,” she said. “And folks, if you are a believer, you understand what happened in Sodom and Gomorrah. You understand. And we are on the threshold. “

“I mean, young people in schools, elementary all the way through universities, are being lied to that these people are ‘born this way,’” she continued. “No, they’re not. I’ve met friends who have come out of that lifestyle, I’ve met men who are willing and ready and begging for a bill to come up in the Texas legislature that they can testify in support of in order to defend the right of parents and defend the right of those individuals who choose to seek a way out of sexual perversion.”

Last year, Adams helped add a plank to the state GOP platform endorsing so-called "ex-gay" therapy. LGBT advocates anticipated a bill mirroring the platform language in the current session, but apparently GOP lawmakers realized they had already done enough damage. Instead, a bill was filed to ban the discredited practice.

Meanwhile, Adams and other anti-gay activists are calling on the Legislature to pass legislation seeking to exempt Texas from a high court ruling in favor of marriage equality. In recent days, with time running down in the session, anti-LGBT groups have issued action alerts calling on lawmakers to advance the bills. Apparently, they are intent on making Texas the next Indiana and haven't bothered to talk to these folks.

Watch video of Adams' remarks, AFTER THE JUMP …