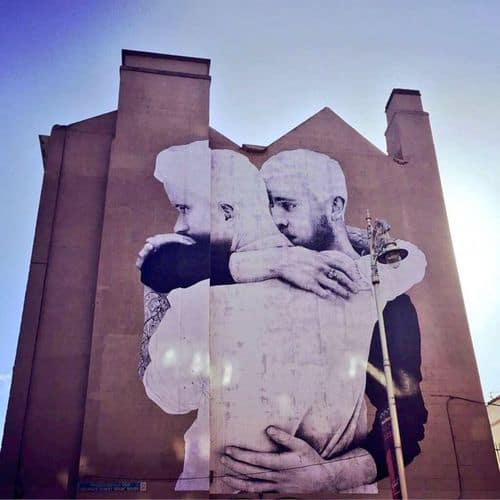 A massive mural for marriage equality which appeared on the side of a building in downtown Dublin last week may have to be removed after the artist received a letter from the Dublin City Council, The Journal reports:

Councillor Mannix Flynn told TheJournal.ie that the letter concerns the removal of the black-and-white paper mural over a planning issue, and is not due to the content of the mural.

Stuff like that would fall in breach of planning. It’s a listed building. As far as I know, a lot of complaints came in. They would be forwarded to planning and planning would issue a general warning letter saying it was in breach and requesting removal by a certain date. If that is not removed, a letter of enforcement would be sent out. It’s about due process.

The mural was elected ahead of the May 22 marriage referendum and Flynn added that the request was not political:

I’m very much a supporter for the Yes camp, and have been campaigning for a Yes vote. but nonetheless, when you see a building like this and a massive piece this size, the law is the law. If there is a laissez-faire attitude, within a short space of time you’ll see people leasing out and renting out the sides of buildings.