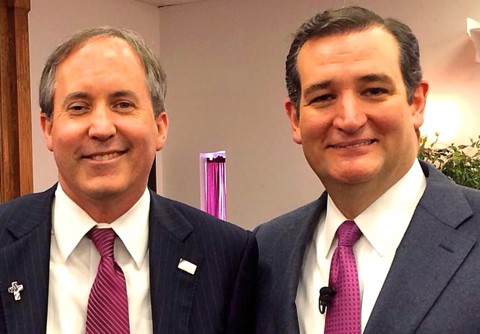 An untold number of gay workers in four states remain unable to take unpaid time off to care for their ailing spouses, after a federal judge in Texas declined to lift an injunction Friday.

The U.S. Department of Justice appealed the order, but O'Connor declined to lift it during a hearing Friday, according to NBCDFW.com.

Paxton, a tea partier who took office in January and is under investigation for securities fraud, is also seeking to void the marriage of a 30-year lesbian couple, one of whom has ovarian cancer.

Presumably, the Justice Department will appeal O'Connor's decision, which will be overturned anyway if the U.S. Supreme Court rules in favor of nationwide marriage equality in June.

The Family Medical & Leave Act grants workers 12 weeks of unpaid, job-protected leave per year "to care for the employee’s spouse, child, or parent who has a serious health condition."

So perhaps we should thank Paxton for drawing further attention to the tremendous harm inflicted by state same-sex marriage bans.