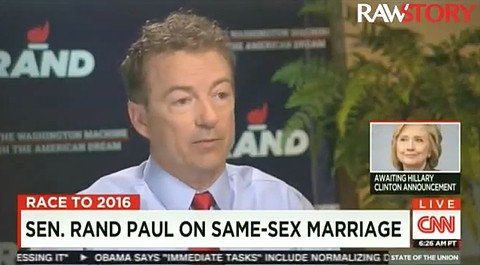 "I do believe people ought to be left alone. I don't care who you are or what you do at home or who your friends are or what, you know, where you hang out, what kind of music you listen to, what you do in your home is your own business. That's always been who I am. I am a leave me alone kind of guy."

"States will end up making the decisions on these things. I think that there's a religious connotation to marriage. I believe in the traditional religious connotation to this. But also believe people ought to be treated fairly under the law….I see no reason why if the marriage contract conveys certain things that if you want to marry another woman that you can do that and have a contract but the thing is is the religious connotation of marriage that has been going on for thousands of years, I still want to preserve that. You probably could have both. You could have both traditional marriage which I believe in but you could also have the neutrality of the law that allows people to have contracts with another."