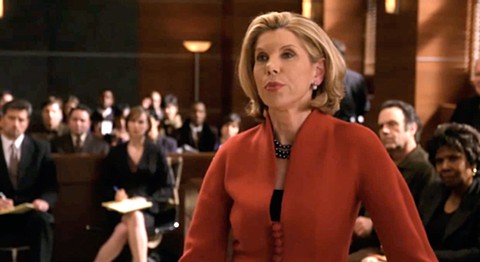 Though it was filmed and written in February, episode 6 of “The Good Wife” feels as if it was planned in response to the “religious freedom” legislative controversies of the past week.

In lieu of an Indiana pizzeria, the episode tells the story of California baker, who refuses to bake a wedding cake for a gay couple.

Prominently featured in the episode is the character of Diane Lockhart (Christine Baranski, above), a lawyer who is consulted for her opinion on reopening the case of the California baker. The debate goes back and forth, with level debate about the legal issues, and little talk of civil rights, but Lockhart is eventually unequivocal: “You’re wondering whether to take up this baker’s appeal? No, obviously,” Diane says. “It’s not because I’m a liberal, it’s because you won’t win.”

Watch a clip (via HuffPost) from Sunday night’s episode, AFTER THE JUMP…

Creators Robert and Michelle King attribute their timing to the writing team:

“I think it’s a combination of having a really good writers’ room. We have seven writers, and what they do all day is argue these issues. We’re part of the writers’ room too. But we’re all looking at the issues that we think are on the cusp of being subjects of debate at the family dinner table when the family gets together for Easter or Passover. What are they going to argue about? And you don’t want to get something that you’re too far behind the issue because then it’s reached its zenith in the zeitgeist. And then you’re kind of on the lower crest of it, or the facts change on the ground. Suddenly the issue that you thought was so hot has kind of cooled only because now it’s another issue. Our writers’ room is very good at doing things two months ahead”