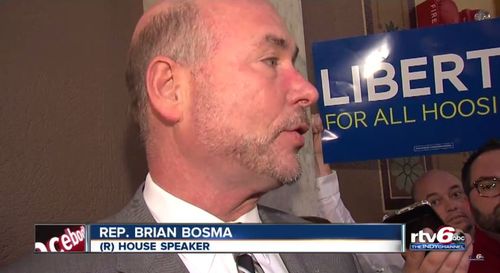 Indiana Republican leaders have announced an addition to the state's new "religious freedom" law that they say will prevent it from being used to discriminate against LGBT individuals.

Senate President Pro Tem David Long, R-Fort Wayne, and House Speaker Brian Bosma, R-Indianapolis said at a press conference at the Statehouse that leaders will present the proposal to lawmakers at 9:30 a.m. after speaking with corporate and civic leadership this week.

"Hoosier hospitality had to be restored," Bosma said.

The leaders referenced the intense backlash that rained down on Indiana after Gov. Mike Pence signed the bill last week.

"It was never intended to discriminate against anyone," Long said. "That perception led to the national protests we've seen."

Bosma said he recently had a sit down with openly gay Olympian Greg Louganis and apologized "not for actions taken, but for messages receive." Bosma and co. are apparently still sticking to the fictitious talking point that they had no idea the bill was being driven through the legislature by anti-LGBT animus.

Watch an RTV6 report on today's press conference, AFTER THE JUMP…

The IndyStar correctly notes that the new proposal "doesn't go as far as establishing gays and lesbians as a protected class of citizens statewide or repealing the law outright, both things that Republican leaders have said they could not support." This means that, as before, it remains 100% legal in many parts of the state to fire, harass, and discriminate against individuals based on their sexual orientation or gender identity.

Full repeal or full protections – that's the only way you're going to quell this backlash in Indiana. Pence and the rest of the state GOP leaders need to wake the hell up.

This bill reduces the threat but is far less than this situation requires. It recognizes there are problems, but does not fix it as LGBT Hoosiers and others urgently need. Now that there's broad public understanding that gay and transgender people in much of Indiana are terribly vulnerable to arbitrary discrimination by businesses, refusal of housing, and being fired just for being who they are–and even Gov. Pence has agreed that that is wrong—that unacceptable situation requires a full solution. We've provided multiple options of straightforward bill language. This is not a complicated or novel task. Many states have done it with only positive results economically and socially. The time is now. America is watching.

Indiana's RFRA is an ill-conceived law that invites religiously motivated refusals to comply with laws that protect everyone. The state’s elected leadership today has taken one step to reduce these refusal problems by amending the RFRA to ensure compliance with civil rights laws. Now they need to complete the fix by actually providing those basic protections that LGBT people need to be equal and safe in the Hoosier State, and by further amending RFRA to prevent it from being used to excuse any harm to other people.