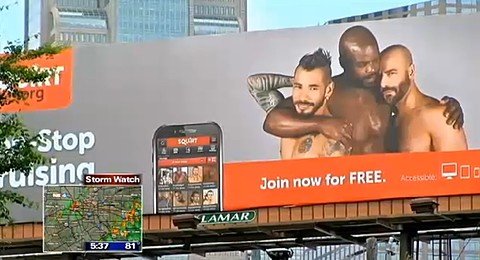 A billboard advertising the gay hookup site Squirt.org is stirring controversy in Dallas, according to a report from Fox 4:

“The main thing that bothers me is that the gay community is trying to, you know, we're trying to get equal rights,” said John Anderson. “We're trying to get marriage rights; things like that. And something like this being put up in a public place, it's completely immoral.”

The app that the billboard is an ad for allows invitations for sex with strange men in public places. …

Not everybody thinks the billboard is out of bounds.

“I don' think it's over the top,” said local resident Jessica Tindall. “I don't think it's too much. I think it's catching up with the times and what we're doing today.” 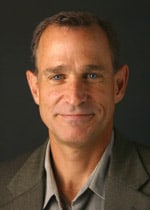 As far as I can tell, the so-called controversy over the billboard was largely manufactured by a conservative editorial writer at The Dallas Morning News, Tod Robberson (right).

Robberson penned a post on April 3 in which he railed against the billboard, apparently prompting Fox 4 to seek out a story. From Robberson's post:

Everything about Squirt.org seems focused on the idea (again, sorry to be so blunt) of male orgasm. Even the dot over the letter “I” in Squirt isn’t a dot. It’s a droplet in horizontal flight. You don’t have to be a cloistered nun to be disgusted by this ad and the notion behind Squirt.org. This advertisement does not belong anywhere on a billboard in this city. I would argue that it doesn’t even belong on a billboard in San Francisco.

Regardless of how you feel about the billboard, it's worth noting that Robberson apparently took no issue with a similar advertisement in January promoting the dangerous practice of gay conversion therapy.

It's also worth noting that a few years back — on Father's Day, no less — Robberson published a glowing interview with University of Texas researcher Mark Regnerus about his widely discredited study on gay parenting.

In a follow-up post responding to Fox 4's story about the billboard on Friday, Robberson wrote:

"It turns out I’m not the only one who finds the Squirt.org billboard at the I-345/Canton overpass to be offensive and in appallingly bad taste. Some gays disagree with it too. And you know what, it’s not really a gay thing. If this billboard depicted a shirtless heterosexual couple embracing, with the 'Non-stop cruising' logo attached, the offensiveness of the message would be the same."

Somehow, that seems a little hard to believe.