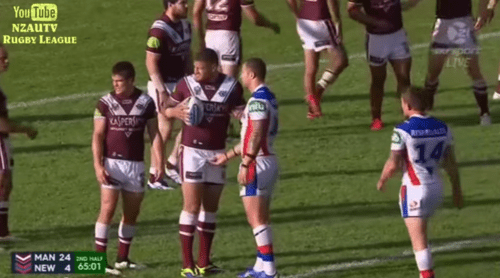 As rugby players Willie Mason and Korbin Sims discovered during Sunday's match-up, there's more than one way to get your head in the game.

Sims was caught on camera grabbing at Mason’s crotch as the Sea Eagles front rower prepared to play the ball during the second half of Manly’s 30-10 NRL win over Newcastle at Brookvale Oval on Sunday.

Video and images of the incident quickly went viral on social media.

Mason did not react to the grope on the field and after the game laughed it off, saying he hoped no punishment would come to Sims as a result of it.

See the happy reunion in action, AFTER THE JUMP…

Korbin Sims was just checking if the rumours are true #BigWillie