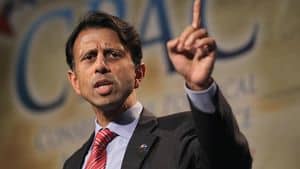 Making good on his promise declared just hours ago, Louisiana Governor Bobby Jindal has issued an executive order intended to protect the "religious liberty" of objectors to same-sex marriage in the state of Louisiana. The anti-gay order takes the place of House Bill 707 which was rejected today by a Louisiana House panel in a 10-2 vote.

Jindal's decision to go through with the executive order, bypassing the legislature, comes just one day after Jindal announced that he formed an exploratory committee to seek the GOP's nomination for President.

Jindal outlined the order in a statement: “This Executive Order will prohibit the state from denying or revoking a tax exemption, tax deduction, contract, cooperative agreement, loan, professional license, certification, accreditation, or employment on the basis the person acts in accordance with a religious belief that marriage is between one man and one woman.” […]

The legislation was a priority for Jindal, he said at the beginning of the year’s legislative session. He said he would “fight” to pass it amid an uproar over religious freedom bills in Indiana and Arkansas that critics said would allow LGBT discrimination. He authored an op-ed published in the New York Times in defense of his support, declaring, “As the fight for religious liberty moves to Louisiana, I have a clear message for any corporation that contemplates bullying our state: Save your breath.”

Jindal defended the bill at home as well, “All this bill does is provide necessary protections for individuals to prevent adverse treatment from the state based on religious beliefs regarding marriage. This legislation does not allow a restaurant or industry to refuse service to a gay or lesbian person.”

Equality Louisiana, an LGBT rights group, and Louisiana Progress Action, denounced the order and suggested that Jindal's actions are squarely to do with his intended presidential bid. Via The Times-Picayune:

"It is shameful that Gov. Jindal has decided that abusing his executive power to accomplish the goals of House Bill 707, even after it was tabled indefinitely by our legislature today, is worth more effort than fixing our disastrous state budget. In his time in Iowa, he may have forgotten what everyday Louisianians value, but the testimony today against HB 707 should have reminded him. Discrimination is not a Louisiana value.

"Gov. Jindal is clearly trying to leave the biggest mess possible, as he readies himself to spend even less time in Louisiana and to launch his presidential campaign. In the end, his extreme ideology is only making the state a worse place for those of us who actually plan to live here past his last day in office."

The Human Rights Campaign (HRC) had a similar assessment:

“This executive order falls into category of unnecessary, gratuitous and discriminatory,” Sainz told BuzzFeed News. “On the same day that Louisiana legislators had the good sense to turn back discrimination, Governor Jindal, who’s facing one of the lowest approval ratings in state history, decided to promote his presidential fortunes by championing ignorance. He’s on the wrong side of this issue and will no doubt be on the wrong side of history.”