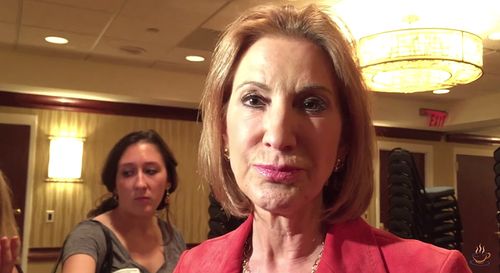 Former Hewlett-Packard CEO and GOP presidential hopeful Carly Fiorina was asked about the upcoming SCOTUS marriage ruling in an interview over the weekend with the political blog Caffeinated Thoughts.

Separating herself from some of her rivals like Scott Walker, Fiorina said she does not support a federal marriage amendment.

“I think the Supreme Court ruling will become the law of the land, and however much I may agree or disagree with it, I wouldn’t support an amendment to reverse it."

Then she swiveled to the hot conservative topic of "religious liberty".

"I very much hope that we would come to a place now in this nation where we can support their decision and at the same time support people to have, to hold religious views and to protect their right to exercise those views.I think this is a nation that should be able to accept that government shouldn’t discriminate on how it provides benefits and that people have a right to their religious views and those views need to be protected.  We need to protect religious liberty in this country."

On the topic of whether she agrees or disagrees with SCOTUS ruling on the issue, it's the former. Fiorina said in February that "the worst thing the Supreme Court can do" is rule on marriage.