A new Irish group called Teachers For No, which includes teachers, parents and academics, has come together fight next week’s same-sex marriage referendum 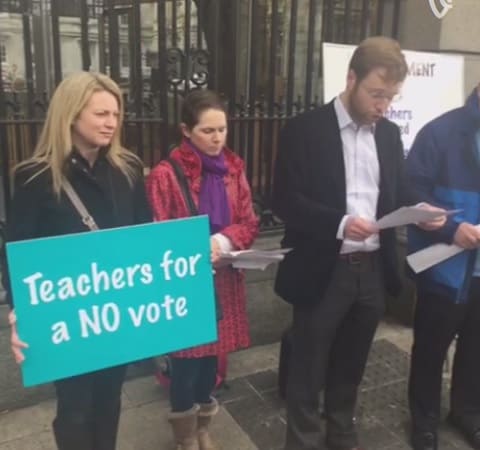 A new Irish group called Teachers For No (TFN), which includes teachers, parents and academics, has come together fight next week’s same-sex marriage referendum, reports the Journal.

The group – which it has been claimed is (another) front for Catholic right wing activist group the Iona Institute, claims that the proposed constitutional amendment will have “serious consequences” for their profession because they may have to explain the notion that two men or two women can love each other.

I love the fact that the tiny but brave band of "teachers for no" is led by the Chair of the Iona Institute John Murray. It's a small world!

“As teachers, our fear is that for example, a teacher who gives preferential treatment to a view of marriage as between a man and woman over a same sex marriage will be seen to be discriminating".

TFN and Iona Institute member Dr John Murray once more brought up the ridiculous notion that those on the No side are being silenced while receiving nationwide online, broadcast and print media coverage at the group’s launch.  The same “silenced” No side last year successfully settled out of court after Rory O’Neill suggested on national broadcaster RTE that they might be homophobic.

Teachers for No can go out and campaign against their students & colleagues. LGBT teachers have to stay quiet or they might lose their jobs

Murray said teachers are afraid to say they’re against marriage equality as they believe it will make them stand out as “not being not in favor of inclusion or to be in someway homophobic”.

He also voiced his fear that “starting with four or five-year-olds, teachers could be expected to be explaining the meaning of ‘lesbian’, ‘gay’, ‘bisexual’, ‘transgender’ and so on” and if the referendum passes teachers will be pressured to “teach stuff like this”.

If like many people in Ireland you are sick of listening to the hate, have a look at a video from Teachers for Marriage Equality, AFTER THE JUMP…