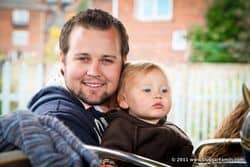 Embattled reality tv star and former anti-gay hate leader Josh Duggar has canceled an upcoming speaking gig at a home schooling convention in Sandusky, Ohio in the wake of his involvement in the sexual abuse of five underage girls over a decade ago.

According to TMZ, Josh told the organizers he would be "too much of a distraction and didn't want the focus of the conference blurred."

No doubt the name of the town would have only added to the distraction.