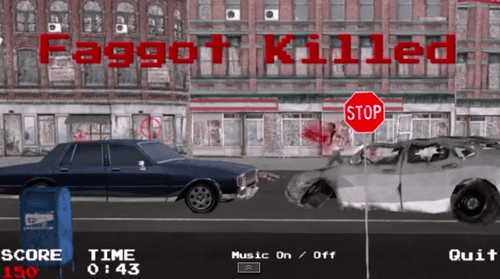 A new video game entitled Kill The Faggot recently appeared in the online gaming store Steam before it was taken down by the store hours later for violating its terms of service. 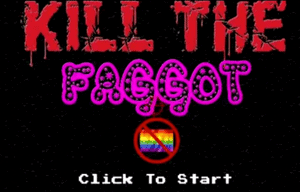 The game was able to appear in the store in the first place due to the company's "Greenlight" initiative. Launched in 2012, the move was intended to open pathways for small developers. A perhaps unintended side effect, however, has been that there is no vetting process governing the content of the games being put out by micro-developers. Kill The Faggot may be the most extreme and unsettlingly bigoted game to hit the store since its inception.

Ars Technica reports that video game critic Jim Sterling was able to download and "test" the game before it was removed and found that that the entire objective of Kill The Faggot is exactly what it sounds like. The single shooter game has players aim a bullseye at individuals in brightly colored clothes who run across the screen like ducks dancing back and forth in a shooting alley while saying things such as "Can I put my weiner in your butt?" and "Whoops, I just dropped the soap." Players are rebuked if they accidentally kill a "straight" person yet gain more points if they kill transgender people. The game's announcer also gleefully declares, "AIDS carrier eliminated" after a "faggot" is killed.

In his video showing the game in all its heinous crudeness, Sterling notes, "Perhaps having absolutely zero vetting process on Steam isn't the best idea." 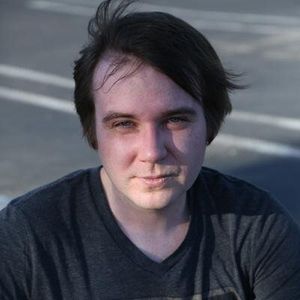 The game was developed by "California [based] developer, skateboarder, and Christian shoe promoter" Randall Herman. Herman owns and operates Skaldic Games, the game shop moniker behind KTF. From Ars Technica:

After KTF was removed from Greenlight, a statement was posted at Skaldic Games' site with a link to a free version of the game and an explanation about its creation. The title had originally been made as a mini-game within a larger open-world adventure that Herman is still working on, he wrote, and he claimed that the game's lack of quality was due to being made "in only a few days."

"These people that think if you are even remotely homophobic, you are 'hateful' and a 'bigot,' and do everything they can to destroy you in every vicious way possible," Herman wrote. "So I decided to go down a path that most developers are afraid to go down: to piss these people off by making the most overly offensive game possible to these idiots to prove a point."

Herman claimed that he received e-mails "wishing physical harm on me" in response to the game, though he did not quote any of those e-mails to clarify what those threats were. He called the game development industry "overly sensitive and easily offended" and claimed to have been part of it "since 2007."

Further investigation on the part of Ars Tehcnica found that Herman had misrepresented his bona fides in the gaming industry and possibly lied about the extent of his involvement in a Christian based skater-shoe line that sought to "promote the words and teachings of Jesus Christ through quality footwear." That shoe company, Devotor, tried and failed to raise money on Kickstarter to get off the ground, so to speak. Herman's exact involvement with Devotor is unclear and he has "declined to respond to any questions about the ideological conflict between those two decidedly different projects [KTF and Devotor]."

Watch a video test of the game, AFTER THE JUMP…(warning: work unfriendly)