No need to wait till June 1 for the official announcement, Sen. Lindsey Graham (R-SC) is already pretty much a go for 2016, The Washington Post reports: 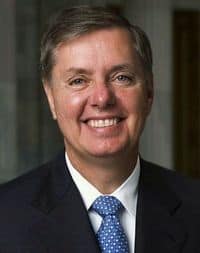 "I will make an announcement on June 1st. You're all invited to come — spend money when you do — and I will tell you what I’m going to do about running for president," Graham said on CBS "This Morning."

Although Graham initially declined to say if he is running when asked by the CBS hosts, he nonetheless indicated he is pursuing the GOP nomination – potentially declaring his candidacy ahead of schedule.

"I'm running because of what you see on television. I'm running because I think the world is falling apart. I've been more right than wrong on foreign policy," Graham said. "It's not the fault of others, their lack of this or that that makes me want to run. It’s my ability in my own mind to be a good commander in chief and to make Washington work. “

Earlier this month, Graham told the Boston Herald that society and the nation must "move forward" if the Supreme Court legalizes same-sex marriage nationwide.