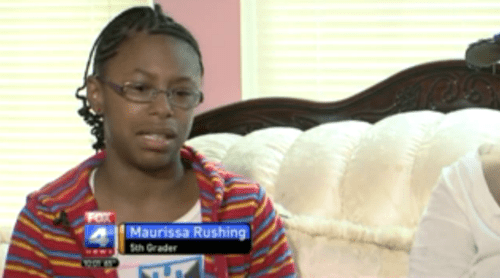 A Kansas, City school bus driver has been fired after reportedly telling two eleven year old girls they were gay and would burn in hell for it, local Fox affiliate WDAF reports:

As her bus arrived to Pathway Academy last Friday morning, [Maurissa Rushing] said her driver let all of the kids off, but asked her and her best friend to stay.

“The bus driver, she took us to the back of the bus. We sat down,” Maurissa said.

She said the driver told the two 11-year-old girls they were gay and would burn in hell for it.

“She said that we are gonna burn in hell real bad. I didn’t expect it to happen,” Maurissa said

Maurissa said she often plays a game with her best friend where the two chase each other's finders up and down their arms. The bus driver told Maurissa that she was "gay" for touching her best friend too much.

The Rushing family says they plan on hiring an attorney. The school is currently conducting an internal investigation.

Watch Maurissa tell her story, AFTER THE JUMP…