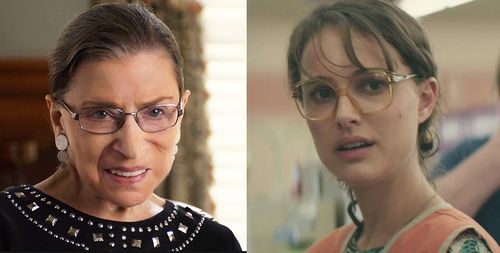 Natalie Portman will play Ruth Bader Ginsburg in On The Basis of Sex, an upcoming film about the life and career of the "notorious" Supreme Court justice, Deadline reports:

The script, which follows the travails of Ginsburg as she faced numerous obstacles to her fight for equal rights throughout her career, was written by Daniel Stiepleman and made the 2014 Black List. Robert W. Cort is producing with Ram Bergman exec producing.

Ginsberg was appointed to the Supreme Court in 1993 by then-President Clinton, becoming only the second female justice (after Sandra Day O’Connor) and the first Jewish female justice. Prior to that, she developed a reputation as a keen advocate for the advancement of women’s rights. Time magazine this year labeled her an “Icon” in its Time 100.

Marielle Heller (The Diary Of A Teenage Girl) in talks to direct.

Previous Post: « Colton Haynes Is Hard (at Work) Soaking Up All the Sun in Spain: PHOTOS
Next Post: Ben Carson Worried ‘Other Groups’ Will Want to Marry After Gays Get Equal Rights: VIDEO »