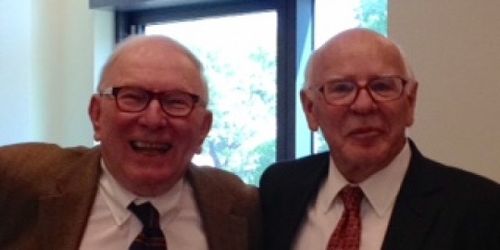 They might have legally been "father" and "son," but it's not what you think. Norman MacArthur (above left), 74, and Bill Novak, 76, of Erwinna, Pennsylvania are a gay couple who used adoption as an alternative to marriage in 2000.

This week, the couple were married, dissolving the adoption that they entered for estate planning reasons. The two men got together in their 20s, and they've stayed together for 52 years.

Previously, in 1994, the couple filed for a domestic partnership in New York City. When they moved to Erwinna in 2000, where their partnership was not recognized. Speaking with Yahoo Parenting, MacArthur said:

When we moved to Pennsylvania, we had both retired and we were of the age where one begins to do estate planning…We went to a lawyer who told us Pennsylvania was never going to allow same-sex marriage, so the only legal avenue we had in order to be afforded any rights was adoption.

It struck me as fairly unusual, but we looked into it and discovered that other couples had done it. [Without the adoption] we would be legally strangers…Most importantly, [the adoption] would allow us visitation rights in a hospital, and gaining of knowledge if one of us was in the hospital…With new HIPAA privacy laws, hospitals are very constrained in what they can say to other people. If we were legally related, I would be allowed into the ER and entitled to know what Bill’s condition was if anything should happen.

Deputy legal director at Lambda Legal Hayley Gorenberg, also speaking with Yahoo, agreed on this point, saying that while these sorts of adoption were never common, they reflected the needs of couples pre-marriage equality. While not a perfect solution to the problem, this type of adoption "reflects people’s deep need to protect each other as family."