BuzzFeed points out a rare moment of compassion and reasonableness from one Rick Santorum: 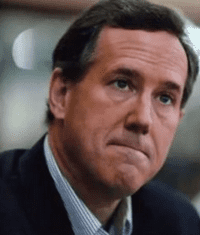 “If he says he’s a woman, then he’s a woman,” Santorum, who is weighing running for president again in 2016, said in response to a question from BuzzFeed News during a roundtable with reporters at the South Carolina Republican Party’s convention. “My responsibility as a human being is to love and accept everybody. Not to criticize people for who they are. I can criticize, and I do, for what people do, for their behavior. But as far as for who they are, you have to respect everybody, and these are obviously complex issues for businesses, for society, and I think we have to look at it in a way that is compassionate and respectful of everybody.”

Santorum added that while he hasn't "got into the whole issue" of transgender bathroom use, he doesn't think it's something the federal government should get involved in. “I think those are things that the business community and local agencies and organizations should deal with," he said.