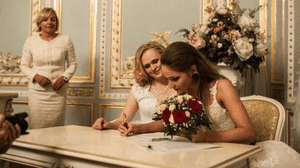 While same-sex marriage is already illegal in Russia, the new law aims to close a loophole that allowed Irina Shumilova and Alyona Fursova (right) to marry in St. Petersburg last November.

Although Shumilova identifies as a transgender woman, she is still male according to her passport.

The new bill is sponsored by Aleksey Zhuravlyov (above), Dmitry Gorovtsov and Anatloy Greshnevikov who argue that the measure is necessary to protect traditional family values.

In 2013, Zhuravlev introduced a bill that would strip gay parents of their children on the grounds that homosexual parents cause "more harm than an orphanage".

In January, the country introduced a law banning transgender people from driving.

Watch a Channel 4 report on Russia’s anti-gay laws, AFTER THE JUMP…