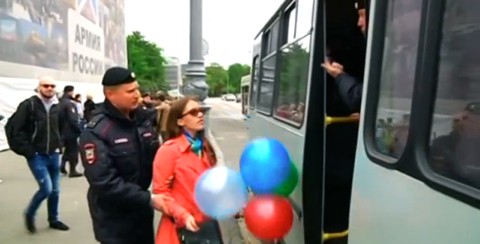 Seventeen gay rights activists were arrested in Moscow on Sunday at a rally to celebrate the International Day Against Homophobia, Transphobia and Biphobia (IDAHO).

The activists had planned to release colorful balloons into the air during the flashmob demonstration, according to Reuters:

Some 50 people assembled on a square outside a Moscow theater but crowd control police drove up a bus and started shoving the protesters inside before they managed to unfurl any banners or chant any slogans.

One of the organizers, Andrei Obolensky, said later that he and others were still detained at a police station, and only one of them had so far been released.

The LGBT community has come under increased pressure in Russia as President Vladimir Putin has charted a more conservative course since starting his third term in 2012.

The activists apparently were arrested under Russia's 2013 law banning so-called gay propaganda. However, a similar demonstration in St. Petersburg was allowed to go forward. The Moscow Times reports: 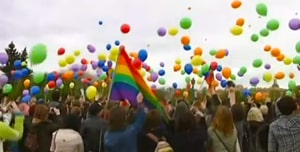 The Sunday gathering at Field of Mars park in the center of the city had been approved by the authorities — despite Russia's law that bans gay "propaganda" in front of minors. Police were standing by to protect demonstrators from any opponents as well as to shield children who happened to pass by from the influence of "propaganda," Russian media reports said.

A little girl tried to approach the demonstration asking for a colorful balloon, only to be held back initially by both police officers, who warned against "propaganda," and rally organizers, who feared a "provocation," Open Russia news portal reported.

After a brief delay, however, she received a balloon, the report said.

Previous Post: « Nick The Gardener Takes You Behind The Scenes of ‘Magic Mike XXL’: VIDEO
Next Post: Mom Hilariously Demonstrates How Her Child Came Out of The Closet: VIDEO »