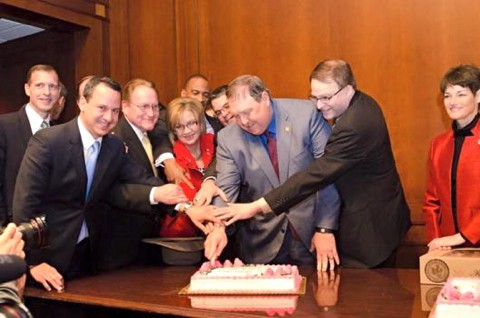 A Texas Republican lawmaker says he dropped an anti-LGBT adoption measure Tuesday because he wanted the House to have time to consider an anti-abortion proposal before a midnight deadline.

As we told you Tuesday, GOP Rep. Scott Sanford had introduced an amendment that would give state-funded, faith-based child welfare providers a license to discriminate against LGBT people. But Sanford ultimately withdrew the amendment. The Dallas Morning News reports:

Rep. Scott Sanford, R-McKinney (right), has said the measure is needed but he pulled down his amendment to allow the House more time to get to a bill prohibiting insurance coverage of abortions in policies sold in the federally run Texas health insurance marketplace.

“The pro-life bills are really important to us,” he said. “In order to get to them, we need to pull down our amendment.”

Incidentally, the House didn't get to the anti-abortion bill, either.

After Sanford dropped his amendment, GOP Sen. Donna Campbell tried to revive it in that chamber, but her effort also failed. From The Texas Tribune:

But Campbell quickly pulled the proposal down after state Sen. Kirk Watson, D-Austin, sought to kill the provision on a technicality. The Senate unanimously passed the bill, HB 2655, once the amendments were withdrawn.

Meanwhile, the Senate is set to consider an anti-gay marriage amendment Wednesday. As we reported Tuesday, the amendment is an effort to revive Rep. Cecil Bell's House Bill 4105, which aimed to undermine a potential Supreme Court ruling in favor of marriage equality. The amendment was added to another bill by a socially conservative Democrat, Sen. Eddie Lucio (below right), in the dark of night. However, even if it passes the Senate, the amendment doesn't appear to have much chance of making it back through the House before the session ends Monday. The House author of the bill is Democratic Rep. Garnet Coleman, a staunch LGBT ally.

If the bill passes in the GOP-dominated Senate, which Coleman expects it to, it would need to return to the House, where the lower chamber's members would have to concur with the changes. Coleman said if he can't strip the anti-gay marriage off his legislation, then he would withdraw it completely.

"If I can't get it off, then the bill goes to bill heaven," Coleman said. "I don't support that legislation or that language." …

Lucio, a strong Catholic and social conservative, said Bell asked him to attach the language to the bill. Wednesday is the last day for the Senate to consider local and consent bills.

Equality Texas is urging people to call senators and ask them to vote against Lucio's amendment.

The Senate convenes at 10:30 a.m. You can watch the proceedings live here.