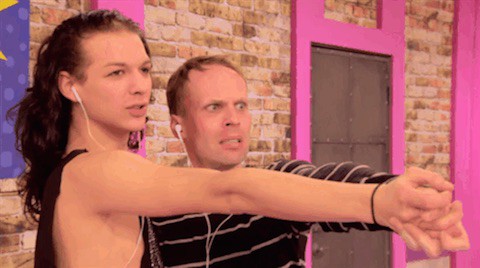 It's getting down to the wire, and so we've got to be prepared to mourn the loss of any of the remaining queens on RuPaul's Drag Race. Tonight's challenge put the queens to werk, hunny. It was one of only a few challenges that I feel like really pushed everyone. The dance challenge was not easy, and even the runway look demanded a degree of creativity.

Let's untuck some of the details of tonight's episode, AFTER THE JUMP …

Before the ladies hit the dance floor, they had to face what might be my favorite mini-challenge of the season. Maybe it's my love of the Real Housewives franchise (or, probably, my obsession with Hulu's Hotwives satire), but I adored the DIY plastic surgery mini-challenge that required the ladies to use scotch tape to modify their face and then create their own awkward Real Housewives-esque intro. All the remaining queens served up some Adrienne Maloof-realness, and I could not get enough of it, darling.

The main challenge paired up the ladies to perform a choreographed dance routine to a mash-up of two wildly divergent musical styles (e.g. country and the robot).

So how'd they do? Check it out in our rankings:

1. It might just be that Katya runs away with this whole thing. Her dancing seemed like it was going to be a disaster in rehearsals, but she turned out a great performance. It’s just one more challenge she’s crushed over the last few weeks. At this point, the crown is hers to lose.

2. (tie) Pearl may have been an, ahem, sleeper in this whole thing, but she’s been saving her best stuff for the end, apparently. Even if her dancing wasn’t, you know, perfect, she attacked every hip thrust with tons of commitment. She really benefitted from having an expert dance partner, but she still held her own. #flasaydah

2. (tie) Finally, a challenge Kennedy can truly excel at. I raved about Kennedy’s performance following her time on the stage at the season seven premiere party in NYC. Tonight’s dance-themed challenge brought out Kennedy’s show-stopping dance moves, including some of the flips and splits that made her the only queen to earn an encore in NYC earlier this year.

4. OK, so we knew going into this that this was not going to be Ginger’s strong suit, but, boy howdy, was it painful to watch. I can forgive Ginger for not being a great dancer, but someone with the stage background Ginger has should be able to PERFORM, regardless. Even Pearl overcame her two left feet to deliver a great performance. I would expect the same from Ginger.

5. Violet got a weird edit this week. There seemed to be a set up with folks like Ginger and Katya talking about how she only excels at runway that she would bungle the challenge. And yet, she was in the winning pair. Are they playing a long game to send her home next week? I think that might be the case. (Trixie was totally right, too. She looked just like Kelly Mantle with all that tape on her face.)

6. Oh, it’s a shame to see Trixie go. Considering the outrage that followed her elimination earlier this season, you would hope she would have at least made top four. Unfortunately, her dance routine with Ginger was clearly the bottom of the bunch, and, sadly, she didn’t have as much good will built up as Miss Minj. I got to give it up to Trixie, though, because I thought her runway was better than Ginger's and so was her lip sync. Yes, I said it.