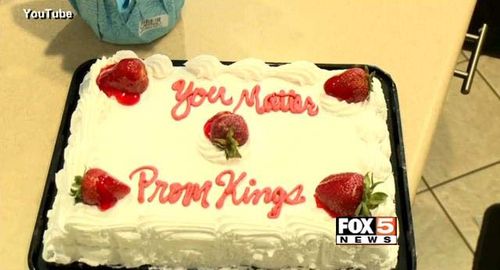 As we reported earlier, a cake celebrating the adorable promposal shared by Nevada teen best friends Jacob Lescenski, straight, and Anthony Martinez, gay, was censored by a local Walmart bakery that refused to give Martinez’s aunt a cake with the word “gay” on it. 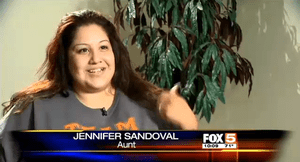 Sandoval said the initial associate told her she couldn’t write that on the cake because it included the word “gay,” and that was against store policy. She then asked to speak with a supervisor.

“[The] Supervisor takes my phone, looks at it, and was like stuck for a minute, and she was like, ‘OK, I’m sorry, we can’t use this’. And then I said, ‘I’m going to ask you what I asked her because you’re the supervisor. Why can’t I use this? I don’t understand. It’s one word. It’s gay,'” Sandoval said.

Not able to use her original idea, Sandoval instead had “You matter, Prom Kings” written on the cake.

According to Fox 5 News, Walmart claims “proper management wasn’t contacted” during the incident and that “nowhere in their store’s policy does it say the word ‘gay’ can’t be written on a cake”:

A store manager is set to contact Sandoval to make this wrong right. Sandoval said although she appreciates the gesture, it’s a little too late.

“It wasn’t hurtful. It was to make my nephew happy, to see a smile on his face. I love that smile, to see that smile, that’s all I wanted, and I’m disappointed. I really am,” Sandoval said.

Watch the news report from Fox 5, AFTER THE JUMP…

Previous Post: « ‘Teen Vogue’ Documents Gay Teen and His Straight Best Friend On Their Hella Cute Prom Night: VIDEO
Next Post: The Men of ‘Magic Mike XXL’ Have All The Force You Need in New Poster, Teaser: WATCH »