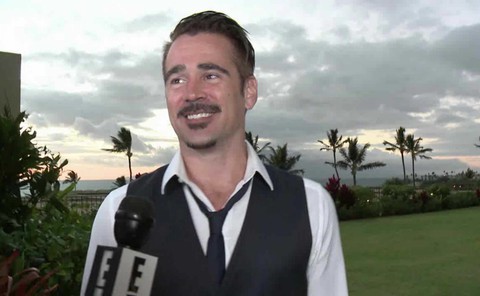 The Irish born actor and True Detective star told E! News that he is “thrilled” and “overjoyed” with the results of Ireland’s nationwide referendum on same-sex marriage.

Speaking about the Catholic Church’s reaction to the vote, Farrell commented,

“It was really funny because one of the arguments when the vote went through was that the church came out and said, ‘You know, this was a dark day for Ireland,’ and all you could see was literally rainbows everywhere, posters of rainbows, T-shirts of rainbows, men and women hugging, men and men hugging, women and women hugging, and yet cut to, ‘This is a dark day in the history of [Ireland]’…A dark day in the history of a country is internal civil conflict and war and bloodshed…It was a great day.”

Asked whether his brother Eamon, who is gay, will get married in Ireland now that it’s legal to do so, Farrell said,

“He certainly has earned the right to… He campaigned very hard. I was a bit concerned about him, he put himself on the line greatly for a cause he believes in… and I’m sure he will be married in the next year. I think it’s time he enjoyed a home-grown celebration.”

Watch the interview, below (warning: auto-play):