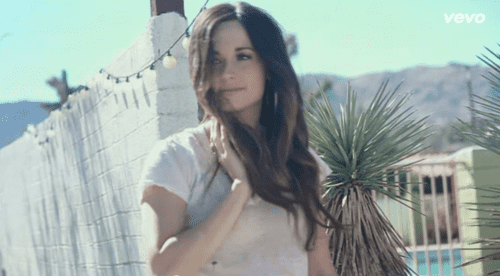 Last year, we told you how country music star Kacey Musgraves’ pro-gay anthem, “Follow Your Arrow,” was named song of the year at the Country Music Awards.

On Monday, Musgraves held a launch party for her new album, “Pageant Material,” at a Nashville gay bar, Play, with the help of some local drag queens. 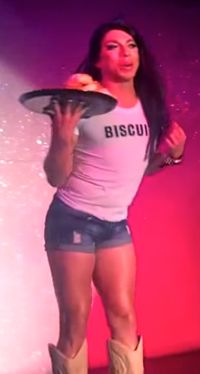 The drag queens performed most of the tracks from Kacey’s album, including the lead single, “Biscuits.” In between the performances, Kacey took the stage to introduce each song while decked out in a black, sequined jacket and satiny, black hot pants.

As for the venue of her party, Kacey has been a regular at Play ever since she moved to Nashville several years ago. She went to a few gay bars while living in Austin, Texas, but none of them compared with the drag shows she saw in Music City.

“Whenever I came here, I just fell in love with it,” Kacey says. “So, it’s kind of cool to come back and have an event here like this. A country music event at a drag bar. I mean, it’s kind of brilliant. I can’t wait to see what the girls are wearing. I’m pretty sure they’re tucking and taping right now getting ready.”

“I’ve had a lot of people come up to me and say that they can walk a little bit taller because they’re a big country music fan and now they have something that really resonates with what they’re going through. I see gay couples at my shows and they feel like they can be themselves, like, holding each other and singing, and that just makes me feel really good. I really am proud of that.”

Watch video of Musgraves’ remarks to kick off Monday’s pageant, as well as a performance of the lead single “Biscuits,” below:

Previous Post: « University of Oklahoma To Construct LGBT Study Lounge, Prompting Cries Of ‘Separate But Equal’
Next Post: At This Thai School, Transgender Students Now Get Uniforms of Their Own »