Earlier we told you how a judge ruled that California Attorney General Kamala Harris doesn’t have to process the so-called “Sodomite Suppression Act,” because it’s “patently unconstitutional.”

Unfortunately, the same cannot be said about a disgusting anti-transgender California ballot measure, for which Harris issued a title and summary on Tuesday, “Limits on Use of Facilities in Government Buildings and Businesses.” 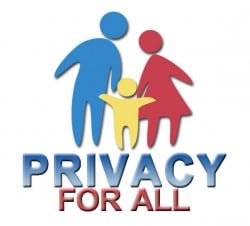 Backers of the initiative, called “Privacy for All,” will now attempt to collect the 365,880 signatures needed to get it on the November 2016 ballot.

If approved by voters, the measure would prohibit transgender people from using facilities in government buildings and require the government to monitor bathroom use, according to an LGBT coalition formed to fight it. It would also allow anyone offended by the presence of an individual in a restroom to sue that person for a $4,000 in damages, as well as attorney’s fees.

The LGBT coalition said in a release Tuesday:

“All Californians should have the same freedom to go about their lives and access government buildings without having their privacy invaded or being forced to undergo invasive examination simply to use a public restroom,” said Kris Hayashi, Executive Director of Transgender Law Center. “The bathroom policing initiative would unfairly single out transgender people and people who don’t meet stereotypes of what it looks like to be male or female for interrogation and exclusion.”

“Privacy for All” is the same group that previously unsuccessfully attempted to overturn AB 1266.  The group is backed by the Sacramento-based Pacific Justice Institute, a right-wing legal organization.

“Our opponents clearly have a taste for irony,” said Rick Zbur, Executive Director of Equality California.  “Why else would they include ‘privacy’ in the name of their organization that seeks to invade the most basic dignity of the transgender community – or really, of anyone who doesn’t match subjective standards of masculinity or femininity? This initiative has no safeguards about who does the interrogating or how an individual would prove their identity.  It’s a recipe for harassment.” …

The bathroom policing initiative goes even farther than efforts in other states or previous California ballot proposals, potentially allowing anyone to sue an individual whose gender expression they found offensive in a restroom.  Government analysts say the measure could cost California millions of dollars every year in legal expenses and lost federal funding.

The initiative also includes language authorizing businesses to exclude individuals from facilities for not looking masculine or feminine enough, and preventing individuals from bringing legal action to enforce discrimination laws. The provision in effect could lead to exclusion based on gender altogether from facilities in those establishments with no legal recourse.

Karen Ocamb at Frontiers has more on “Privacy for All,” which was founded by Prop 8 mastermind Frank Schubert:

“Privacy for All” is the same group anti-LGBT group that mounted an unsuccessful effort to overturn AB 1266, the Access for All Students bill that went into effect this year. Though their lies were exposed during that attempt, they will undoubtedly try to raise enough funds to hire paid signature-gatherers who will use whatever ruse and lie will get unaware voters coming out of shopping malls to sign their petition to put the initiative on the ballot.

If Schubert is on board, they might hope that an anti-trans bathroom bill ballot victory in California might have a ripple effect throughout the country as happened immediately following the passage of Prop 8. The trans community has been a target of right wing activists since it became evident they lost the war over marriage equality. With anti-LGBT religious liberty bills popping up in statehouses around the country, preventing trans people from using public bathrooms is like a pincer move, squeezing the LGBT community from behind.

Read the full text of the measure as submitted to the attorney general’s office below.