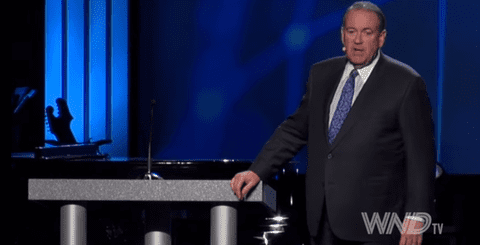 Speaking at the 2015 National Religious Broadcasters Convention in Nashville, Tennessee earlier this year, GOP Presidential hopeful Mike Huckabee said he wishes he could have pretended to be transgender in high school so he could have "showered with the girls" after PE, BuzzFeed reports. The comments came to light over the weekend when a video of Huckabee's speech was posted online by World Net Daily. In the speech Huckabee also sounds the dog whistle of religious liberty (yet again), and conflates providing civil rights to transgender persons with pedophilia and sexual impropriety.

“For those who do not think that we are under threat, simply recognize that the fact that we are now in city after city watching ordinances say that your seven-year-old daughter, if she goes into the restroom cannot be offended and you can’t be offended if she’s greeted there by a 42-year-old man who feels more like a woman than he does a man.”

“Now I wish that someone told me that when I was in high school that I could have felt like a woman when it came time to take showers in PE. I’m pretty sure that I would have found my feminine side and said, ‘Coach, I think I’d rather shower with the girls today.’ You’re laughing because it sounds so ridiculous doesn’t it? And yet today we are the ones who are ridiculed and scorned because we point out the obvious. “That there is something inherently wrong about forcing little children to be a part of this social experiment. I’m not against anybody. I’d just like for somebody to bring their brain to work some day and not leave it on the bedstand when they show up to govern.”

It would also be nice if Huckabee would sometime bring his brain when he shows up to speak and realize that his comments about supposed sexual misconduct say more about him than they do the LGBT community.

Watch Huckabee's speech, which begins to address transgender rights at about the 8:10 mark, AFTER THE JUMP…

The whole "pretending to be trans" thing ONLY happens in the minds of right-wing conservatives like Mike Huckabee. http://t.co/BDvbYFWBJv

Previous Post: « Majority Of LGBT Americans Say Mainstream Religions Are Unwelcoming
Next Post: The ‘Gay Of Thrones’ Recap of S5xE8 Is Here – Hardbone »