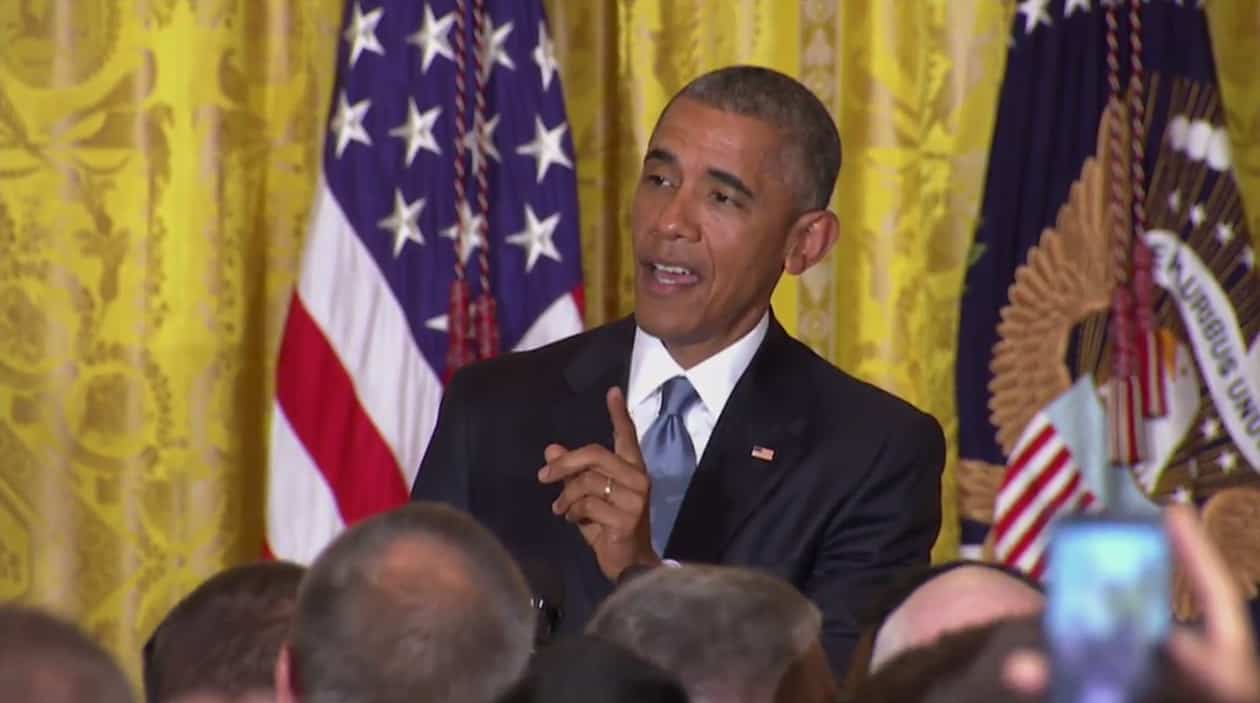 President Obama spoke today at a special LGBT Pride reception at The White House held in honor of Pride month, addressing the historic changes that have taken place during his two terms and office and also noting the work still to be done for LGBT rights.

Before he could start his remarks, President Obama was heckled by an audience member who repeatedly interrupted him, shouting “President Obama.” The President was visibly displeased and had to ask that the person be removed. For video of the heckler and President Obama’s reaction, go HERE.

Once the President’s remarks got underway, Obama made direct reference to the Supreme Court’s upcoming decision on same-sex marriage, stating that regardless of how the Court rules there has been an undeniable “shift in attitudes across the country” on the issue of marriage:

When I became President, same-sex marriage was legal in only two states.  Today, it’s legal in 37 states and the District of Columbia.  A decade ago, politicians ran against LGBT rights.  Today, they’re running towards them.  Because they’ve learned what the rest of the country knows — that marriage equality is about our civil rights, and our firm belief that every citizen should be treated equally under the law.

The President also spoke of the need to expand transgender rights. The call to action comes amidst mounting pressure to allow transgender persons to serve openly in the military.

Said the President, “But we know that transgender persons still face terrible violence and abuse and poverty here at home and around the world.”

The President was then heckled again but in a somewhat more friendly manner. An audience member cried out, “The transsexuals love you.” To which President Obama replied,

Well, that’s the kind of heckling I can always accept. But, seriously, too many folks are still targeted, and transgender women of color are particularly vulnerable.  (Applause.)  So that kind of ugliness simply doesn’t belong in America.  That’s not who we are.

You can read President Obama’s full remarks, below.

REMARKS BY THE PRESIDENT

THE PRESIDENT:  Hey!  Hey!  Hey!  (Applause.)  So this is rowdy crowd.  (Applause.)  I don’t want you guys to break anything while you’re here now.  (Laughter.)  Thank you, Megan, for the wonderful introduction and, more importantly, the great work that you are doing.  We’ve got some outstanding members of Congress here today, including Leader Nancy Pelosi.  Give Nancy a big round of applause.  (Applause.)  I want to thank all of you — advocates, organizers, friends, families — for being here today.

THE PRESIDENT:  Yes, hold on a second.

THE PRESIDENT:  Listen, you’re in my house.  (Laughter and applause.)  You don’t — come on.  It’s not — you know what, it’s not respectful when you get invited to somebody —

get a good response from me by interrupting me like this.

THE PRESIDENT:  Can we escort this person out?  Come on. You can either stay and be quiet, or we’ll have to take you out.  All right, can we have this person removed, please?

THE PRESIDENT:  Come on.

THE VICE PRESIDENT:  I do.

THE PRESIDENT:  Okay.  And drinking the booze.  I know that’s right. Anyway, where was I?

AUDIENCE MEMBER:  We love you!

THE PRESIDENT:  I love you back.  (Applause.) So the civil rights of LGBT Americans, this is an issue whose time has come.  And we’ve got a lot to celebrate because of your hard work.  And there are people here who have been working these issues for decades.  And so this is something where it’s bearing fruit today, but it has to do with courage that was happening in obscurity and incredible difficulty.  And I am so honored to be a part of seeing all that hard work pay off.

A lot of what we’ve accomplished over these last six and a half years has been because of you.  Because of the groundwork that you and so many of you laid before, from sophisticated national campaigns to small, quiet acts of defiance — together, we’ve been able to do more to protect the rights of lesbian, gay, bisexual, and transgender Americans than at any time in our history.  (Applause.)

Together, we ended “Don’t Ask, Don’t Tell.”  (Applause.)    We passed a historic hate crimes bill named in part after Matthew Shepard.  (Applause.)  We lifted the HIV entry ban, and this summer, we’re going to be updating our national HIV/AIDS strategy which will focus on eliminating disparities that gay and bisexual men and transgender women face.  (Applause.)  We strengthened the Violence Against Women Act to protect LGBT victims.  (Applause.)  Hospitals that accept Medicare and Medicaid are now required to treat LGBT patients the same as everybody else.  (Applause.)  The pillar of the so-called Defense of Marriage Act was struck down by the Supreme Court as unconstitutional.  (Applause.)  Just yesterday, we announced that insurance companies that cover federal workers will no longer be able to prohibit gender transition services.  (Applause.)

And, of course, we’re now awaiting the Supreme Court’s ruling on whether same-sex couples nationwide have the equal right to marry.  (Applause.)  There are a few decisions coming down these next few days — (laughter) — that I’m paying close attention to.  But however the decision comes down on the marriage issue, one thing is undeniable — there has been this incredible shift in attitudes across the country.

When I became President, same-sex marriage was legal in only two states.  Today, it’s legal in 37 states — (applause) — and the District of Columbia.  A decade ago, politicians ran against LGBT rights.  Today, they’re running towards them.  (Applause.)  Because they’ve learned what the rest of the country knows — that marriage equality is about our civil rights, and our firm belief that every citizen should be treated equally under the law.

Now, we all know there’s a lot more that we can and must do.  In 2015, at a time when we have laws that say Americans can’t be fired for the color of their skin or their religion or if they have a disability, it is wrong that hardworking Americans still live in fear of being fired simply because of who they are or who they love.

That’s why I’ve repeatedly called on Congress to pass the Employment Non-Discrimination Act, which would explicitly prohibit discrimination against LGBT workers.  (Applause.)  And that’s why we’ve got to keep the pressure on until they do it.  (Applause.)

In the meantime, we’re doing what we can to protect workers.  Last year, my administration prohibited discrimination on the basis of sexual orientation and gender identity by federal contractors, for federal employees.  (Applause.)  And that’s protecting an estimated 1.5 million Americans.

I support efforts to ban conversion therapy for minors.  It has no basis in science.  (Applause.)  Every young person — no matter who they are or what they look like or what gender they identify as — deserves to be valued and loved for who they are.

In just the past year, America has come far in its acceptance of transgender Americans.  (Applause.)  And we’ve got brave folks coming out at the highest levels of business and government, and in sports and in Hollywood.  We’re seeing television shows portray transgender characters and families.  And the power of example is slowly but surely changing people’s hearts.

But we know that transgender persons still face terrible violence and abuse and poverty here at home and around the world.

THE PRESIDENT:  Well, that’s the kind of heckling I can always accept.  (Applause.)

But, seriously, too many folks are still targeted, and transgender women of color are particularly vulnerable.  (Applause.)  So that kind of ugliness simply doesn’t belong in America.  That’s not who we are.

And the truth is that courage comes in a lot of forms.  There’s courage in the moment of danger — the kind our troops show in battle.  There’s the courage of resilience and perseverance — what we see in our brave wounded warriors.  There’s moral courage of the sort we saw in Dr. Martin Luther King, Jr. and Harvey Milk, who fight for their ideals.  And then there’s the kind of courage it takes to be true to yourself even if society doesn’t always accept or understand you.

And nobody has got a monopoly on that kind of courage.  It can come from all walks of life.  And to a young boy or girl out there struggling with their own identity, the folks in this room are heroes, have shown extraordinary courage.  Not only are you helping others find the strength to be true to who they are, you’re helping America be true to who we are as a nation.

And that’s ultimately what this Pride month is all about.  It’s about commemorating the bravery at Stonewall, when in the face of hatred and violence, a group of Americans decided to stand up for their rights to be who they are.  It’s about celebrating the extraordinary progress we’ve made in making sure that LGBT Americans can enjoy their rights to pursue life, liberty and happiness.  But it’s also about pride in who we are as a nation.

We are big and vast and diverse.  We’ve got different backgrounds and different beliefs.  We’ve got different experiences and stories.  But we are bound by our shared ideal that no matter who you are or what you look like, where you come from, who you love — this is a place where you should be able to write your own ticket, and be who you are, and revel in your true self.  We’re a people who believe enough in America’s promise to make it real for everybody.

And those of us who know freedom and opportunity, thanks to the toil and blood of those who came before us, we have an extra responsibility to extend freedom and opportunity to other people who are still marginalized and still facing injustice.  Working families who aren’t getting paid a living wage.  Women who aren’t getting paid equally for their efforts.  (Applause.)  Immigrants who deserve to have a pathway to be able to get right with the law.  (Applause.)  Anybody who is treated differently because of the color of their skin or the nature of their faith.  Anybody whose right to vote is threatened.

So there are still battles to wage, more hearts and minds to change.  As long as there’s a single child in America that’s afraid they won’t be accepted for who they are, we’ve got more work to do.  But if the people in this room and our friends and allies across the country have proven anything, it’s that even in the toughest of circumstances, against the greatest possible odds, in America, change is possible.  It’s in our hands.  Together, I know we’ll get there.  Look how far we’ve already come.