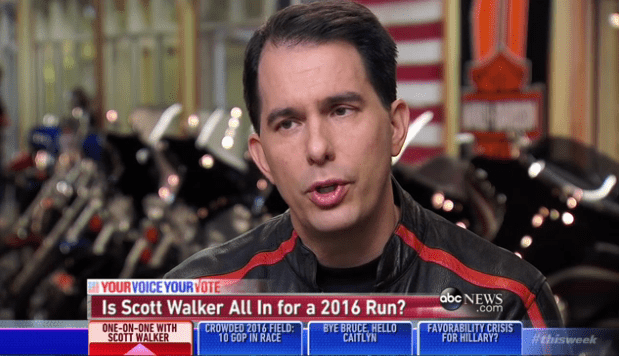 Wisconsin Governor Scott Walker flexed his social conservative credentials in an interview with ABC News’ “This Week,” saying that if the Supreme Court legalizes same-sex marriage nationwide, the “next approach” for individuals opposed to gay marriage will be with an anti-gay constitutional amendment.

When asked by Jon Karl whether that meant he supported an amendment allowing states to continue banning same-sex marriage, Walker replied:

I believe that the decision on defining marriage should be left up to the states, yeah.

Walker is expected to announce his 2016 presidential bid later this summer.

Previous Post: « A 32-year-old homeless man has been arrested and charged with hate crimes for allegedly pushing a transgender woman onto the train tracks at the Greenwich Village station platform on Monday, Reuters reports: Rolan Reid, 32, was arrested on Friday on the same No. 6 train line where the woman was attacked on Monday, Sergeant Carlos Nieves said. He is charged with second-degree attempted murder as a hate crime, and with various assault counts, Nieves said. The 28-year-old victim was treated and released from a local hospital following the incident on Monday morning. She had been approached by a man who was acting erratically, threw an empty plastic bottle at her and pushed her onto the tracks. Watch an NBC 4 report on the incident
Next Post: Fox News Sunday Panel Debates Whether Caitlyn Jenner Is a ‘Publicity Stunt’ – VIDEO »