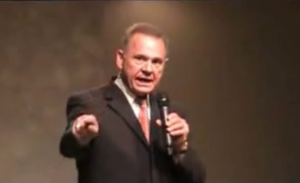 “Dignity is given of God, not government. And He gave dignity to man and woman. In fact we all know when you consummate a marriage, that act is a dignified act. But we can’t change it to an undignified act and call it ‘dignity.’ Then we call good evil and evil good. We but darkness for light and light darkness. We put bitter for sweet and sweet bitter. We can’t change God’s law. We just don’t have that power. Now if anybody wants to take that down and put it in print, I’ll stand behind it. Because you can’t change God’s law and get away with it.”

Moore also discussed abortion and his fight against the federal government to keep the a monument of the 10 Commandments at the Alabama Judicial Building ( the embarrassing episode cost Moore his job, but he was subsequently reelected by Alabama voters in 2012).

Perhaps the most notable moment of the speech, however, came at the end when Moore unveiled a poem he wrote about all his favorite social causes.

“One Nation under God was their cry and declaration,
Upon the law of Nature’s God they built a mighty Nation.
For unlike mankind before them who had walked this earthen sod,
These men would never question the Sovereignty of God.

That all men were “created” was a truth “self-evident,”
To secure the rights God gave us was the role of government.
And if any form of government became destructive of this end,
It was their right, indeed their duty, a new one to begin.

So with a firm reliance on Divine Providence for protection,
They pledged their sacred honor and sought His wise direction.
They lifted up an appeal to God for all the world to see,
And vowed their independence forever to be free.

I’m glad they’re not here with us to see the mess we’re in,
How we’ve given up our righteousness for a life of indulgent sin.
For when abortion isn’t murder and sodomy is deemed a right,
Then evil is now called good and darkness is now called light.

While truth and law were founded on the God of all creation,
Man now, through law, denies the truth and calls it “separation.”
No longer does man see a need for God when he’s in full control,
For the only truth self-evident is in the latest poll.

But with man as his own master we fail to count the cost,
Our precious freedoms vanish and our liberty is lost.
Children are told they can’t pray in school and they teach them evolution,
When will they see the fear of God is the only true solution?

Our schools have become a battleground while all across the land,
Christians shrug their shoulders afraid to take a stand.
And from the grave their voices cry, the victory has already been won.
Just glorify the Father as did His only Son.

And when your work on earth is done, and you’ve traveled where we’ve trod,
You’ll leave the land we left to you, One Nation Under God!”

Moore’s talk starts around the 22:00 mark

Previous Post: « The Science Behind Why Public Speaking Makes You Panic: VIDEO
Next Post: Texas Judge Says He’ll Marry Gay Couples, But Only If He Can Insult Them First »