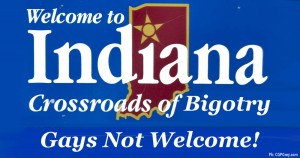 A county employee in Harrison County, Indiana has filed a lawsuit claiming she was discriminated against for her religious opposition to same-sex marriage.

Linda Summers sued the county and county clerk Sally Whitis in federal court on Friday, saying she was fired for refusing to process a same-sex marriage application.

Whitis fired Summers the next day for insubordination, the lawsuit alleges, despite Summers’ claim that two co-workers had offered to process same-sex applications for her.

“The foregoing discharge occurred without any attempt by the defendant to accommodate plaintiff and her religious beliefs, despite the fact that plaintiff made her sincerely-held beliefs known to defendant Whitis,” the complaint states.

Previous Post: « Julianne Moore and Ellen Page Are Fighting for Love in Tearjerker First Trailer for ‘Freeheld’ – WATCH
Next Post: Nervo, Kylie Minogue, and Jake Shears Have ‘Other Boys’ On Their Minds In Discotastic New Track: LISTEN »