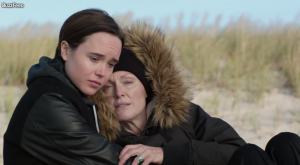 The first trailer for the upcoming gay rights drama Freeheld has been released, chronicling the true story of a lesbian police officer with terminal cancer (Julianne Moore) who fights to ensure her partner (Ellen Page) has access to her pension benefits.

It’s based on a short documentary film, also called Freeheld, and comes from director Peter Sollett, best known for Nick and Norah’s Infinite Playlist. The screenplay is written by Ron Nyswaner, who wrote the Oscar-nominated script for Philadelphia.

The film co-stars Steve Carell, Luke Grimes, and Michael Shannon and will be released October 2.