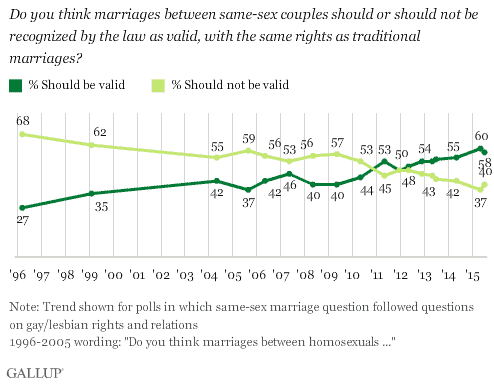 Despite the recent discouraging poll from the AP, a new poll from Gallup finds that, in the wake of Obergefell, public support for gay marriage is holding strong at about 60%.

The new poll shows that 58% of voters support gay marriage. This figure is comparable to a record high support of 60%, found in a Gallup poll from May 2015. According to Gallup, this is not a statistically-significant difference.

Interestingly, Gallup’s report contains an advisory that, despite numbers holding steady for now, approval percentages are most likely not done shifting. In its report, Gallup indicates a poll from soon after the 1967 Supreme Court decision that legalized interracial marriage. In this poll (1968) only one in five Americans approved of interracial marriages; it took 30 years for there to be a majority support.

Gallup notes that this example is different because the court “led public opinion by legalizing something that Americans largely disapproved of at the time” — an interesting fact when considering dissents from Obergefell.

Head to Gallup for poll methodology and additional info.