You are here: Home / Jon Stewart Can’t Get Enough of the Donald Trump 2016 Sideshow: VIDEO 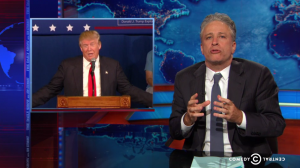 With only two weeks left in the chair, Stewart is trying to make the most of the spectacle and devoted a large portion of last night’s show to the Trump (he couldn’t help it)

Side note: According to Trump, Stewart is “begging” him to appear on the final Daily Show episode on August 6.